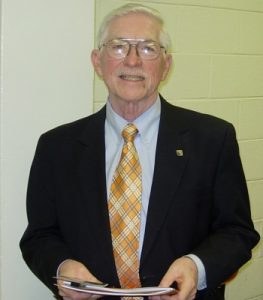 Wilbur (Dub) Shults, member of the Chemistry Board of Visitors at the University of Tennessee, Knoxville, was inducted into the 2016 Class of  Fellows of the American Chemical Society (ACS). The announcement was made in the July 18, 2016 issue of Chemical & Engineering News. The new fellows were honored at the August ACS meeting in Philadelphia.

Shults was named an ACS Fellow because of his contributions both to the scientific society and to the ACS community. Shults was “recognized for creating electrochemical techniques essential for precisely determining the composition of nuclear materials and for developing the Oak Ridge National Laboratory Analytical Chemistry Division into a world-leading organization.” Stated on the 2016 Fellow website, “as Chair of the ACS Division of Analytical Chemistry, he implemented a new Division Management System and was instrumental in establishing the Division’s Award for Distinguished Service in the Advancement of Analytical Chemistry, both of which continue today.”

Shults hails from Atlanta, Georgia, born to a railroad family in 1929. He moved to Greenville, South Carolina to complete his high school education and attended Emory University to pursue a bachelor’s degree. After he completed a master’s degree in chemistry, Shults moved to Oak Ridge, Tennessee in 1951 and got his first job as a technician at a radiochemistry lab in the Division of Analytical Chemistry at Oak Ridge National Lab.

In 1955, Shults was drafted by the Army and sent to Fort Jackson for basic training and later reported to Denver Colorado to work in a nerve gas plant operated by the Army. After spending two and half years in the Army, Shults finished his tour of duty and came back to ORNL in 1957 to work in a research development group. With the encouragement of his mentor Myron Kelley at ORNL, Shults went back to school in 1962 to pursue a Ph.D. degree in chemistry at Indiana University. He completed two years of study there and came back to ORNL to finish his research in 1964, and was awarded the Ph.D. degree in 1966. Since then, Shults has lived in the Oak Ridge and Knoxville areas with his wife, Sue, and their three children.

Shults was promoted to Division Director at ORNL in 1976. During his long and fruitful career, he also served as the Head of the Analytical Chemistry Division of ACS. Shults retired from ORNL at the end of 1994 and became heavily involved in community service. He served on the Board of Visitors of the Department of Chemistry UT and was the president of Coalition of Oak Ridge Retired Employees from 2008 to 2013.

The ACS Fellows program was created in 2008 to recognize members of ACS for “outstanding achievements in and contributions to science, the profession, and the Society.” Find out more on the website.

Note: Dub Shults’ bio was summarized based on an interview conducted in 2012 and archived in the Center for Oak Ridge Oral History.