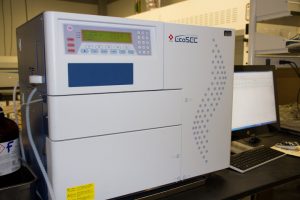 The EcoSEC GPC system is a semi-micro system with a low dead volume which allows for the use of semi-micro GPC columns. The EcoSEC is a self-contained system with temperature controlled pumps, column ovens, and detectors operating in the range of room temperature + 10°C up to 60°C. The instrument has both an RI detector and a UV detector which operates at a single wavelength between 195-350 nm. The RI detector has a flow reference cell rather than the conventional static reference cell. The operating flow rates are 0.35 ml/min for both the reference cell and the sample cell. The EcoSEC has a 100 sample capacity autosampler. The column set installed in this instrument consists of the following three columns: 2 Tosoh TSKgel SuperMultiporeHZ-M; 4.6×150 mm; 4 µm; and a TSKgel SuperMultiporeHZ-M guard. The calibration range is ≈600 to 7,500,000 daltons using either PS or PMMA standards.