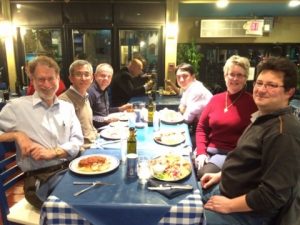 Janice Musfeldt, Ziegler Professor of Chemistry at the University of Tennessee, Knoxville, in collaboration with David Vanderbilt, Sang-Wook Cheong, Kristjan Haule, and Valery Kiryukhin from the Department of Physics and Astronomy at Rutgers, the State University of New Jersey, recently won a $1.6 million Designing Materials to Revolutionize and Engineer our Future (DMREF) Award from National Science Foundation for their project titled “Collaborative Research: Emergent functionalities in 3d/5d multinary chalcogenides and oxides.”

The winning project will consist of “a concerted theoretical and experimental exploration of materials in which 3d and 5d transition-metal sites coexist in multicomponent chalcogenide and oxide crystals and films.” As stated in their proposal.

“The research results from this award show promise for identifying new materials with improved properties such as stronger or more tunable magnets, materials whose electrical conduction can be switched in novel ways, and materials to serve in future generations of optical devices.” Vanderbilt said.

The program will also bring broader impacts to advance science education by organizing summer or winter schools for interested students and providing mentorship. Their first effort was the Quantum Materials Synthesis (QMS) Symposium that was held on August 30 and September 1 in 7 World Trade Center, New York. The development of new workshops on spin-orbit coupling in quantum materials as well as an international network for quantum materials research is part of the outreach of this collaborative project.

Graduate student Michael Yokosuk in Musfeldt’s group presented his recent research on magnetoelectric coupling at the QMS Symposium. His research paper was also accepted at Physical Review Letters. “Working with the DMREF team has really opened my eyes up to the world of materials science and physics.” Yokosuk said. “Working with this high-class team has been one of the most rewarding experiences in my science career. Their understanding of the subject matter really drives me to learn and become more independent as a researcher, while keeping close contact with collaborators.”

This is the second time that Musfeldt and her team have received this award. The first one titled “Collaborative Research: Enhanced functionalities in 5d transition-metal compounds from large spin-orbit coupling“ also in the amount of $1.6 million was awarded in 2012.

“It was very productive.” Musfeldt commented on their 2012 project, “one metric of science impact is publications. This collaboration produced a total of 24 papers in four years, with 11 in Physical Review Letters and two in Nature Communications.”

“Our collaborations with the Musfeldt group have been extraordinarily useful.” Vanderbilt added. “One aspect that has been especially rewarding is our series of working meetings, held three or four times per year, where we get together for two concentrated days of informaltalks to share our research visions and results.  As a result of this NSF-DMREF collaboration, I find that I, as a theorist, am working more closely with experimentalists than at any previous time in my career.”

“The new award supports work in a different but related direction – this time with greater focus on novel phases in multinary materials.” Musfeldt said. “Now that the program has been renewed by NSF, I hope to involve another student or two.”

As a participant in the Materials Genome Initiative (MGI), the National Science Foundation awards a limited number of grants to researchers for Designing Materials to Revolutionize and Engineer our Future (DMREF). Initial DMREF awards in 2012 total $12 million were earmarked for 22 grants in support of 14 DMREF efforts. In 2014, NSF has issued a solicitation for up to $22 million in awards under DMREF program. And in 2016, the total funding has grown to $36 million.

Picture on the right: 2016 QMS Participants