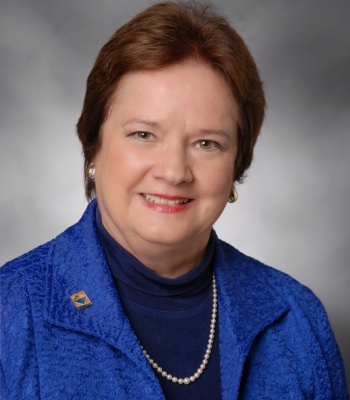 Chair, Board of Visitors

Diane Grob Schmidt,Ph.D.,  the 2015 ACS President, was an Executive at The Procter & Gamble Company, where she served as a R&D Section Head for 17 years. Her P&G career spanned 1981-2014 during which she played key roles in such brands as Tide®, Head & Shoulders®, Pert Plus® and Safeguard®. Dr. Schmidt had responsibility for health, safety and environment and regulatory affairs before retiring from P&G in 2014. She is the inventor or co-inventor on myriad patents, in addition to author or co-author on chemistry publications in refereed journals. She has received many awards, including ACS Fellow, AAAS Fellow, National Academy of Inventors Fellow, Fellow of the Division of Chemical Health & Safety, Henry Hill Award, and Distinguished Scientist of Cincinnati (first woman so honored). She has served on the editorial boards of the Journal of the Society of Cosmetic Chemists and the Journal of Chemical Health & Safety. She is a lifelong member of ACS and has held a wide variety of leadership positions, including three consecutive terms on the Board of Directors. As 2015 ACS President, her Presidential theme was “Inspiring and Innovating for Tomorrow”. Her legacy as ACS President includes: U.S. and Global Grand Challenges via impactful programming  (Nanotechnology, Energy, BRAIN Initiative/Chemical Measurements/Chemical Neurotransmission), championing the establishment of the American Association of Chemistry Teachers (AACT), advocacy on behalf of ACS members and  focus on industry and  ACS members.