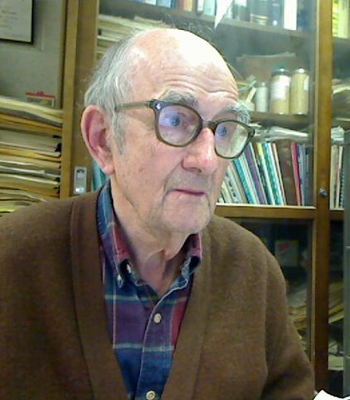 Our primary interest is in the structure and reactivity of free radicals and radical ions. These paramagnetic species are generated by solid state gamma-irradiation techniques and studied by electron spin resonance (ESR) spectroscopy. The ESR hyperfine pattern of the signal carrier contains detailed information about the spin distribution and geometry that allows the complete molecular structure of the radical to be determined. The ESR technique is also used to follow the unimolecular and bimolecular reactions of these species.

Current work is centered on the important role of vibronic coupling that, in the case of low-lying excited states, brings about an admixture of excited-state character into the wavefunction of the open-shell molecule. This pseudo-Jahn-Teller effect can induce structural distortions resulting, for example, in the twisting of the bicyclo[2.2.2]oct-2-ene radical cation about the olefin bond [Chem. Eur. J. 8, 1074 (2002)]. It also serves to promote radical cation rearrangements, many of these involving either the ring opening of strained molecules or hydrogen-atom transfer.

Recently, we have become interested in the role of radical cation chemistry in biological amine oxidation processes catalyzed by enzymes such as the monoamine oxidases and cytochrome P-450. Some of the drugs that are used to treat Parkinson's disease are inhibitors of these enzymes, and their "suicide" action on the enzyme can be understood in terms of radical cation rearrangements that we can explore directly by ESR spectroscopy. Essentially, it has been proposed that the key step leading to enzyme inactivation by these substrates on oxidation is the conversion of the initially-formed aminium radical cation (a nitrogen-centered radical) of the drug substrate to a carbon-centered radical that subsequently attacks the active site of the enzyme. This kind of rearrangement leads to distonic radical cation formation in which the spin of the unpaired electron (on carbon) and positive charge (on nitrogen) become separated.

We have in fact observed this radical cation rearrangement for the parent cyclopropylamine [J. Am. Chem. Soc. 109, 595 (1987)] and parent allylamine [J. Chem. Soc., Chem. Comm. 1988, 1069] molecules. Remarkably, many of the drugs (tranylcypromine, selegiline, vigabatrin) that are used in the treatment of depression, Parkinson's disease, and epilepsy through the regulation of amine oxidation in the brain contain a cyclopropyl, allyl, or propargyl group adjacent to the amine function. Accordingly, these drug molecules are ideally structured to undergo a similar type of radical cation rearrangement, and our goal is to characterize and study the kinetics of the intermediates that take part in this important process of suicide enzyme inactivation.

Dr. Williams was a National Science Foundation Visiting Scientist to Kyoto University, Japan from 1965 to 1966 and was the recipient of a Guggenheim Fellowship in 1972. He has been Chairman of the Gordon Research Conferences on Radiation Chemistry (1971) and Radical Ions (1984), and served as an associate and consultant editor of Radiation Research, the official journal of the Radiation Research Society, from 1994 to 1999.

A. M. ElSohly, G. S. Tschumper, R. A. Crocombe, J. T. Wang, and F. Williams, "Computational and ESR Studies of Electron Attachment to Decafluorocyclopentane, Octafluorocyclobutane, and Hexafluorocyclopropane: Electron Affinities of the Molecules and the Structures of their Stable Negative Ions as Determined from the 13C and 19F Hyperfine Coupling Constants," J. Am. Chem. Soc. 2005, 127, 10573-10583. Published on Web 07/08/05.

F. Williams, "Reevaluation of the Propagation Rate Constant in the Radiation-Induced Cationic Polymerization of Isobutylene in Solution," Macromolecules 2005, 38, 206-209. Published on Web 12/08/04.