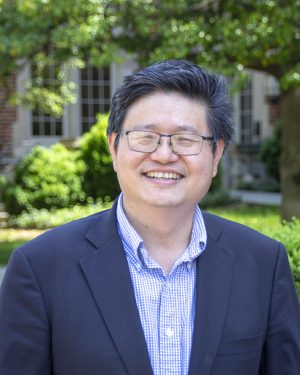 Materials for Catalysis
Catalysis is critically important to energy production and to meeting DOE's environmental quality mission of promoting the development and utilization of clean, efficient, and reliable energy resources. The overarching goal of this research effort is to understand the relationships between the atomic and nanoscale structure of metal nanoparticles and catalyst supports and the crucial role these play in promoting or altering catalytic pathways. Our current interest lies in controlled synthesis of gold and intermetallic nanoparticles with unique metal-support interactions for heterogeneous catalysis. The synthesis techniques used extensively are high-temperature colloidal synthesis, templating synthesis, atomic layer deposition, and solvothermal synthesis.

Materials for Separation
Replacing energy-intensive separation methods with energy-efficient processes, such as membrane-based separation or adsorption, is an essential step toward substantial future energy savings. It is clear that energy-efficient gas-separation media as well as carbon-capture and sequestration processes are vitally needed throughout industry and government to both power our economy and address the global issue of climate change. The overarching goal of this program is to investigate fundamental issues of chemical separation phenomena at the gas-solid, gas-liquid, and liquid-solid interfaces of nanostructured architectures and unconventional separation media that selectively bind or transport target molecular species via tailored interactions. The focus of our current research is on synthesis and characterization of porous carbon materials, ionic liquids, and carbon–ionic liquid integrated systems for carbon capture. “Smart” materials hold the key to transformational advances in energy-efficient separation processes due to their unique ability to discriminate molecules based on a combination of geometry and selective chemical recognition.

Materials for Electrical Energy Storage
Securing a sustainable supply of clean energy is among the most critical challenges facing our nation in the 21st century. The efficient utilization of electricity generated from solar, wind, and other intermittent sources, as well as the high energy and power densities needed to power electric vehicles, requires some form of electrical energy storage, such as batteries or electrochemical capacitors. Supercapacitors that have nanoporous electrodes offer an exciting solution to this major technological problem. The overarching goal of our research is to answer fundamental questions related to fluid‑solid interfaces when the interface exhibits nanoscale textures and tailored surface chemistry, interacting with electrolyte ions and solvent molecules with distinct molecular sizes and shapes. Achieving superior performance with the next generation of electrical storage devices will require a fundamental knowledge of the nanoscale architecture of the interface, the effect of nanotexture on interfacial properties, and the structural and dynamic changes that occur during charge and discharge cycles. We need an atomistic understanding of the individual processes associated with ion and solvent transport at nanotextured interfaces. The controlled synthesis and characterization of model nanoporous materials and novel electrolytes will be accomplished in this research program.

Sheng Dai received B.S. (1984) and M.S. (1986) degrees from Zhejiang University and then obtained a Ph.D. degree (1990) from the University of Tennessee, Knoxville. He currently holds a Joint Faculty Appointment between ORNL and UTK and serves as the Group Leader of the Nanomaterials Chemistry Group, Chemical Sciences Division at Oak Ridge National Laboratory. His research interests include porous materials, ionic liquids, catalysis, separation, energy storage, and radiation sensors.