Polyolefins are among the world’s most widely produced and utilized classes of polymers, serving as synthetic alternatives to traditional materials such as wood, glass, and metal. While numerous prior research efforts have focused on the development of faster, more efficient, and less expensive catalysts, recent studies have demonstrated that redox-active olefin polymerization catalysts may also be employed to modulate catalytic activity, reactivity, and selectivity in situ.

The group reports a computational study based on density functional theory designed to better understand the structure and underlying olefin polymerization mechanisms of the active catalytic species in two distinct redox states. These findings are further supported through experimental evidence and suggest that upon activation of the reduced catalyst species, the added electron density of the catalyst is transferred from the active metal center to the alpha-diimine ligand. 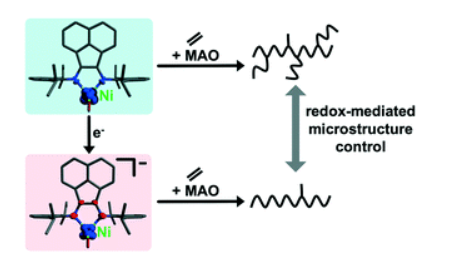 The observed decrease in polyethylene branching that results from catalyst reduction is believed to stem from changes in the subtle balance of steric, electronic, and entropic effects, primarily perturbing the coordination of subsequent monomer units. This perturbation is expressed not only in the monomer-inserted-product energy differences but also in the catalysts’ deviation from square planarity about the Ni center. Through these studies, we can better understand how the addition of an electron to a Ni(ii) alpha-diimine catalyst perturbs its catalytic behavior, which may influence the design of future generations of redox-active olefin polymerization catalysts.