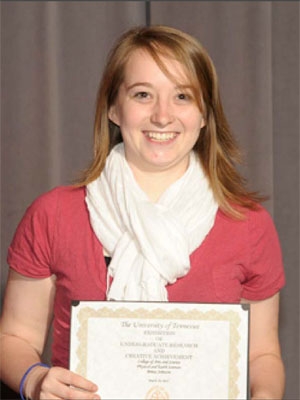 Someone who looks at Britta Johnson’s resume will find a number of impressive achievements, including several semesters of undergraduate research in the University of Tennessee’s Department of Chemistry.

In recognition of her research efforts, Johnson was awarded a Best Presentation prize during UT’s 2012 Exhibition of Undergraduate Research and Creative Achievement (EUReCA).
The project she presented, “Dynamics of He adsorption on
MgO(100) surfaces,” focused on theoretical studies of the bound states of He atoms that are adsorbed on the surface of an MgO crystal.

Some of Johnson’s results were published in the Journal of Physical Chemistry* in 2011, in an article titled “Pairwise Additive Model for the He-MgO(100) Interaction.” Johnson was the article’s first author.

Britta’s co-author, Robert Hinde, has been Johnson’s undergraduate research mentor.  The two have worked together since summer 2009.  “Britta has been a great student and a great collaborator,” Hinde said.  “Her research has taught us a lot about fundamental atom-surface interactions.  A better understanding of these interactions can ultimately help scientists understand in more detail how chemical catalysts work.”

Johnson joined UT as a College Scholars major with a program of study titled “Quantum Dynamics and Mathematics.” When asked how she became interested in chemistry, Johnson responded that, “I knew I wanted to at least try research and see if it was something I would want to do… my Honors Chemistry professor (Dr. Kovac) had suggested I look into doing research with Dr. Hinde, and I’ve never looked back.”

Hinde’s research area is computational and theoretical chemistry, which might not be what most people think about when they first hear the word “chemistry.”  Research projects in theoretical chemistry frequently combine topics from chemistry, physics, and mathematics, and the projects often involve the use of computer programs to solve mathematical equations or perform simulations of chemical phenomena.

“I think it is amazing that basic mathematical concepts can be used to understand and model increasingly complex chemical systems,” Johnson said.  She added that she also found writing her own computer programs to be somewhat “intimidating” at the beginning; as she persevered, however, she became more fluent in programming and started writing, from scratch, the programs that she used in order to conduct her research.

Johnson felt grateful for having Hinde as her mentor. “I could not have asked for a better research advisor; whenever I have questions, whether they be about research, classes to take, or graduate school applications, I can always go to Dr. Hinde for advice.”

Johnson grew up in Knoxville and went to Karns High School before she joined UT.  While at UT, she was named a Goldwater Scholar.  After graduating this spring, Johnson will attend the University of Wisconsin to earn a Ph.D. degree in Physical Chemistry.