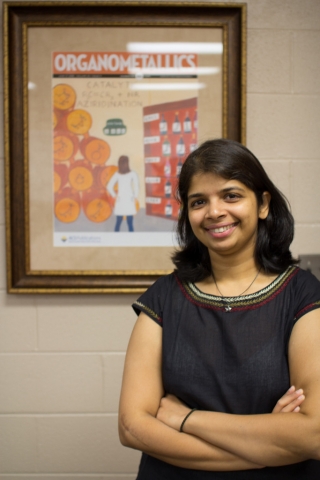 Preeti Chandrachud, a fifth-year graduate student had her third paper published in the journal Organometallics in June 2016. The editorial board selected this article as a top manuscript and designated it for a cover selection. Since she is an amateur painter, Chandrachud also got the opportunity to design the cover art for the issue.

“I think it shows a great combination of science and art,” says Rachel Rui, director of recruiting, communication, and development in the Department of Chemistry.

Chandrachud’s research group investigates new methods for homogeneous aziridination catalysis. Homogenous catalysis involves preparing catalysts that dissolve in solutions to accelerate a chemical reaction, in this case aziridination. Aziridination is the process of forming a triangular ring with one nitrogen and two carbon atoms.

“Aziridines are important because of their presence in many biologically significant compounds, some of which have anti-tumor and antibacterial properties,” says Chandrachud. “More importantly, aziridines are intermediates for making complicated pharmaceuticals. One example is in the synthesis of Tamiflu.”

Despite their importance, aziridines are difficult to synthesize. In the paper, Chandrachud and her research group describe a general method for preparing a wide variety of aziridines using a novel catalyst. This method is of particular significance because it is environmentally-friendly. The only waste product is nitrogen gas. The group also prepared bicyclic aziridines, which are very important structures for biologically-relevant molecules.

The paper is based on the group’s second generation catalyst. Organometallics is a renowned journal in synthetic chemistry. Chandrachud and her group are especially proud because the editor accepted the paper without any changes, featured it on the cover, and allowed Chandrachud to create the artwork.

“We were very pleased with this decision,” says Chandrachud, whose advisor, David Jenkins, associate professor of chemistry, gave her creative freedom to design the cover art.

The cover design was a collaborate process. Chandrachud drew some rough sketches and while discussing them, Jenkins suggested a winery motif.

“As a wine connoisseur, I loved the idea,” says Chandrachud. “Although I am an amateur painter, Dr. Jenkins trusted me to paint the cover myself.”

After a couple rough paintings, the duo decided on the final design, which appears on the cover of the issue.

“The process was exciting and fun for me because I got to make my own painting for the cover article, which is not a common for many scientific journals. Most covers simply show diagrams or data figures. The editorial staff at Organometallics loved the contrast and original art,” says Chandrachud, who would like to thank UT and NSF for funding the project. “I feel really privileged for the opportunity to finish off my Ph.D. this way.”

By: AMANDA WOMAC*, PREETI CHANDRACHUD**
*College of Arts and Sciences
** Department of Chemistry