Co-authored with Professor Jenkins, Cramer is the first author of this paper Synthesis of Aziridines from Alkenes and Aryl Azides with a Reusable Macrocyclic Tetracarbene Iron Catalyst.

In this paper, the two researchers expanded upon previous examples of catalytic aziridination, which utilize the more atom economical azide funtional group as the nitrene transfer reagent.  They demonstrated that their catalyst could perform the first ever examples of catalytic aziridination with tri- and tetra-substituted alkenes, as well as, electron donating aryl azides. “Our new iron tetra-NHC catalyst can perform these reactions not only at very low catalyst loading, but it can also be easily separated and recycled up to an additional three times.” Cramer said. Since the aziridine functional group is found in natural products and also used in pharmaceuticals, broadening the scope of the aziridination reaction is significant. 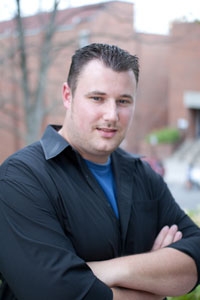 Born and raised in Powder Springs, GA, Cramer always wanted to be a chemist. He received his Bachor of Science degree in Chemistry from Kennesaw State University in 2008 and joined Jenkins Group a year later.

Working towards Ph.D., Cramer’s rearch has been focusing on organometallic synthesis with a special interest in structure and bonding and how these characteristics can be tuned from a molecular orbital stand point.  His current research involves trying to stabilize high energy metal ligand multiple bonds and performing oxidative group transfer reactions from them with various substrates.

Founded in 1879, JACS is the flagship journal of the American Chemical Society and the preeminent journal in the field. This periodical is devoted to the publication of fundamental research papers in all areas of chemistry and publishes approximately 16,000 pages of Articles, Communications, Book Reviews, and Computer Software Reviews a year. Published weekly, JACS provides research essential to the field of chemistry and is the most cited journal in chemistry field as reported in the 2010 Journal Citation Report© Thomson Reuters.

Last year, Cramer also co-authored a paper 18-Atom-Ringed Macrocyclic Tetra-imidazoliums for Preparation of Monomeric Tetra-carbene Complexes that was published in Organometallics, another American Chemical Society publication with a high Impact Factor of 3.888, ranked in the top ten in citations, impact factor, articles published and immediacy index in both categories.