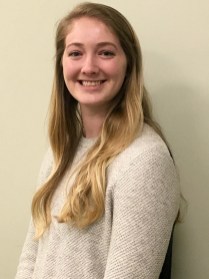 When Carolyn Barnes started college, she had her heart set on attending medical school. As she progressed through courses in biology and chemistry, however, she discovered a different career path.

“I realized my interest in medicine was more focused towards understanding the cellular and molecular processes that cause humans to have diseases and illness rather than just treating those diseases,” says Barnes, a senior in chemistry and member of the Chancellor’s Honors Program.

Barnes was first introduced to the field of lipid and membrane chemistry during her junior year. In 2017, she studied at Johannes Gutenberg University in Mainz, Germany. In 2018, she has the opportunity to study in the Czech Republic thanks to a Fulbright Award.

“I am excited to experience the Czech Republic and be immersed in the culture while also pursuing research I find really interesting,” says Barnes, who will study the dynamics of pancreatic cells involved in insulin release.

Insulin is the hormone that controls blood-sugar levels in the body. When a person loses control of releasing insulin it affects the body’s ability to control blood-sugar level, which in turn, causes diabetes. Barnes became interested in this line of research when she learned about a friend’s experience being diagnosed with juvenile diabetes.

“Type II diabetes accounts for 90 percent of diabetes cases worldwide, but the molecular mechanisms of this are very poorly understood,” Barnes says. “We hope this research will allow us to differentiate the effects of several different types of fat on insulin secretion from pancreatic cells.”

Barnes, who is from Knoxville, started working in labs at UT as a senior in high school. Since her arrival at UT, she has worked in several labs and learned different aspects of research and collaboration. She fell in love with the lab atmosphere and the research she conducts when she began working with Michael Best, professor of chemistry.

“The field of lipid chemistry is diverse and has a lot of applications that have only begun to be investigated,” Barnes says. “I enjoy the atmosphere in a lab where those who surround you have the same thirst for knowledge and the desire to discover something that might change the world.”