Borylated polymers are emerging as valuable chemosensors that can report analyte binding through an array of responses. Fluorescent materials are particularly valuable in this regard, as modulation of their photophysical properties can facilitate rapid substrate detection and quantitation.

“In this manuscript, we report the condensation of aryl boronic acids onto polyvinyl alcohol (PVA) to afford fluorescent polymers, a phenomenon that has been widely overlooked,” Jacobs said. “ Importantly, selective modulation of the photophysical properties was observed in the presence of borophilic anions (e.g. fluoride, hydroxide, and cyanide).”

Density functional theory (DFT) calculations, performed by collaborator Jacob Townsend in the Vogiatzis Research Group, suggested that a combination of covalent and non-covalent interactions were crucial for anion binding. Time-dependent DFT computations were also performed to explain the appearance of a distinct peak in the polymer’s absorbace profile.

“Lastly, films of these PVA-aryl boronates were employed in ion extraction studies, highlighting a useful secondary function these materials possess,” Jacobs said. “Given the ease with which these polymers can be accessed, they could serve as general platforms for developing ion selective membranes or detectors.” 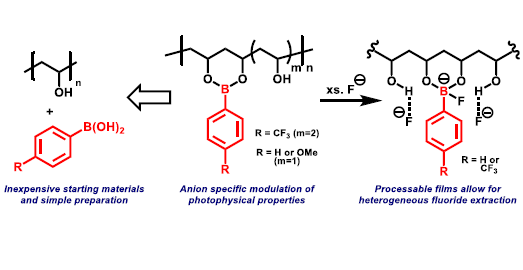