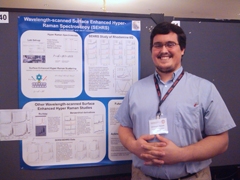 The Camden group attended the International Conference on Raman Spectroscopy held at Boston, MA from August 8 to 13.  During the conference, Dr. Camden presented a talk on Wavelength Scanned Surface Enhanced Hyper Raman Spectroscopy.  Chris Bennett and Vighter Iberi both presented posters at the student poster session.

Bennett collaborated with Camden and discussed recent advances in Hyper Raman spectroscopy in his project. Topics include a discussion of wavelength-scanned surface enhanced hyper Raman spectroscopy of various active molecules. Unusually high Hyper Raman signal has been produced on silver colloids from incident laser power as low as 106 W/cm2 average power, as shown in the figure below. This has enabled the discovery of a new two-photon accessible resonant mode in Rhodamine 6G (abstract provided by Bennett, picture on the left). 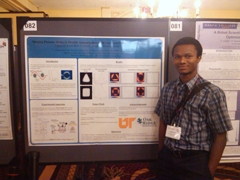 The goal of Vighter, Camden and Guiton’s project is to correlate the optical measurements of nanostructures generated by the surface plasmons using Resonant Rayleigh Scattering, with high resolution structural information obtained by using Scanning Transmission Electron Microscopy (STEM). This technique will also reveal the different localized surface plasmon modes in the nanostructure as well as the relationship between the optical surface plasmons and the plasmons generated from the inelastic scattering of the electron beam. The measurement of the surface plasmon excitations in a STEM is called Electron Energy Loss Spectroscopy (EELS)(abstract provided by Vighter, picture on the right).