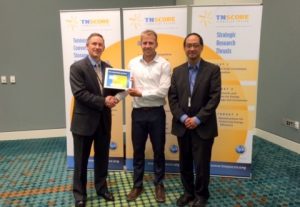 Cameron Lee, a fourth year graduate student in Dadmun’s group, received one of three best poster awards from the annual TN-SCORE conference for his titled work “Conditions for the Formation of P3HT Organogel During Spin-Coating: Tuning Electrical Properties of Thin Films.” Lee was presented the award along with a $1000 travel stipend.

Lee’s poster highlighted research and results from a novel static light scattering instrument used to monitor the in situ onset and morphological evolution of a low bandgap, conjugated polymer used in organic photovoltaics and organic electronics, poly(3-hexylthiophene), during spin coating. Using this novel apparatus, specific processing conditions, such as solvent choice and composition, were correlated to the formation of organogel aggregates, aggregate size, and resultant electronic properties of the final film.

Lee’s research funding comes from TN-SCORE (Tennessee Solar Conversion and Storage using Outreach, Research and Education), a National Science Foundation EPSCoR RII Track I Research Infrastructure award. The program goal is to provide competitive research initiative to smaller undergraduate institutions in the state of Tennessee, but more importantly to provide a culture of collaboration among smaller schools and flagship schools like Vanderbilt University and the University of Tennessee Knoxville. The research is themed around three main thrusts: Advanced Solar Conversion, Devices for Energy Storage and Conversion, and Nanostructures for enhancing Energy Efficiency.

Lee was raised in the rural Appalachian town of Romney, West Virginia, a region known for its apple orchards and rolling hills. He earned his B.S. in chemistry at Wheeling Jesuit University, also receiving scholarship money to compete as a NCAA Division II multi-events athlete on the track and field team. Lee continued his interest in the sport after he joined UT chemistry department in 2010. He is now volunteering on the Vol and Lady Vol track and field team in his spare time. Enjoying all Knoxville has to offer, he has moved out of traditional housing, deciding instead to reside on a houseboat on the Tennessee River. After joining the Dadmun’s Group in 2011, Lee’s research has focused on the structure-property relationships of conjugated polymers for use in organic photovoltaics and electronic devices.