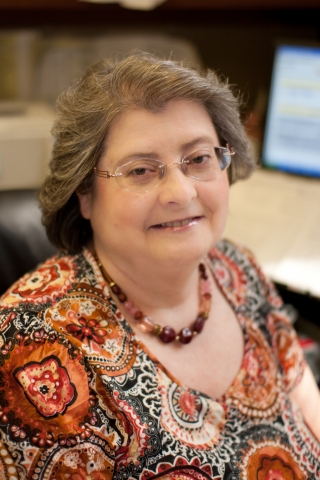 Sharon Marshall, business manager for the Department of Chemistry has retired on July 31, 2016, after 28 years of service to the University of Tennessee, Knoxville. Marshall is a Knoxville local, growing up in Fountain City with her parents and two older sisters. She graduated from Central High School in 1976 and obtained her Bachelor’s degree in Music Education from UT  in 1980. After working in Kingsport, Tennessee for a year and half as the youth and children’s choir director and director of activities in a church, Marshall returned to Knoxville. She subsequently worked part time as an adult, youth and choir director and youth director at churches and held part-time jobs in the retail industry. Marshall’s first job at UT was in the library business office in 1985. In 1989, Marshall steered her career back to local music education. But two years after her son was born, in 1992, Marshall decided to return to the University and accepted a job in the chemistry department to assist faculty with managing their awards. She stayed with the department since then. During Marshall’s time in the department, she held five different positions which all involved working with proposals and awards. Marshall was appointed the department business manager in 2005. The following interview was conducted on July 26, 2016, just before Marshall retired.

Interviewer: When did you come to work for UT? And what was your first job?

Marshall: My first position at UT was in the Library Business Office.  I started in August 1985 and left UT in August 1989 to pursue another career outside of UT.

Interviewer: When did you join the chemistry department and what was your first day like?

Marshall: I returned to UT in the Chemistry Department in May 1992.  I don’t remember a whole lot about the first except that several people smoked inside the Business Office/storeroom and I hated smoking.  I remember being overwhelmed the first day partly because the building was in the process of being remodeled floor by floor and they were removing all the asbestos.  You never knew from day to day what to expect.  If a stairwell just stopped all of sudden because the steps were missing or if walls had been removed or knew ones built where none had been before.

Interviewer: What changes have you noticed in the department since your arrival?

Marshall: The first thing is the Business Office/Chemstores was all shelves full of all kinds of things with only the front two rooms used as office space.  After I became the business manager and with 100% support from Dr. Craig Barnes we decided to expand the proposal/grant support for the faculty which involved hiring a second grants and contracts coordinator and another person to handle all of the extra paperwork due to IRIS.  This allowed the business office to work one on one with each faculty member on each of their proposals and maintain their accounts through the entire life of the award. Second, there are a lot of faculty here now that are so young that I could be their mother! Third, with the great knowledge of Dr. Fred Grimm we designed and implemented the Chemistry Purchasing System.  It has been a wonderful tool that has benefited everyone in the department. I will be forever grateful for Fred and his hard work on the project.

Interviewer: What are your most cherished memories here?

Marshall: My most cherished memories are working with Darrell Lay and Bobby Lay. They have become like the brothers I never had.  They made this a fun place and we still got our work done in spite of the laughter!

Interviewer: What will you miss most when you retire?

Marshall: The people who have respected my work and what I have accomplished while I was here. I have made a tremendous amount of friends all over the campus during the past 28 years. Many are very close and dear to my heart. They taught me a great deal about how the university works and how so many aspects effect all of the accounts, whether they are grants or state funds.

Interviewer: What’s your plan after retirement?

Marshall: Well, since UT retirement doesn’t pay enough to live on, I will be seeking a second job. I will be looking for something that doesn’t involve as much responsibility has I have had as the business manager. And I plan on enjoying myself as much as possible. I would like to travel occasionally in the United States.