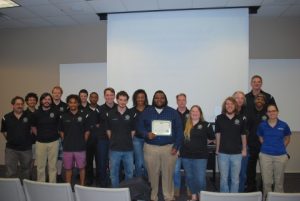 Ricks was part of the SRSP inaugural class and was also the first person to graduate from SRSP to pursue a higher degree. “It was cool to see the students there now,” Ricks said. “Some of them actually remembered me from under grad which was nice because a lot of them were just coming to GRU when I was trying to graduate.”

More than 50 students and faculty attended the seminar. Ricks was proud to serve as a good example for other SRSP scholars. “Everyone was genuinely excited about the work I was doing and had accomplished to date so it was nice to be an example of success coming from a small school and going to a big school.”

Ricks joined the Chemistry Department in 2012 and was inducted into the PEER class of 2013. “Its great being a part of PEER. I’ve gotten a great opportunity to do outreach, develop new academic programs and seminars, as well as having extra time to devote to research. Being in PEER so far has definitely helped me get acclimated to grad school as well as preparing for life after it.” Ricks said.