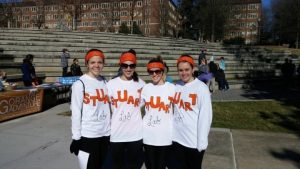 Sam Rosolina, a fourth year chemistry graduate student in Professor Xue’s Group and the chemistry representative on the Graduate Student Senate, organized the 2015 Big Orange Adventure, a fundraising race/scavenger hunt that benefited McClung Museum of Natural History and Culture on University of Tennessee Knoxville campus. This year’s fundraising was held on Saturday, March 7th and raised a total of 820 dollars.

A total of nine stations and tasks were created across campus, such as World Puzzle Based Using Periodic Table to Solve (chemistry), Laser Table Obstacle Course (physics), and Tower of Hanoi (math). Once completing all tasks, the competing teams were allowed into McClung Museum to solve one final riddle using their knowledge of some of the exhibits.

“There were eight teams with 42 participants total.” Rosolina said. “We gave out two baskets filled with sponsor in-kind gifts. The first went to the fastest team, and the second went to best team costume. We also had some trophies that one of my committee members made from spray-painted figurines that he got at a thrift shop nearby.”

In previous years, the GSS hosted the “Love Your Libraries 5k” to benefit the UT libraries; specifically the “De-stress for Success” campaign during Finals Week. Profits from the race were donated to the library to help provide relaxing services during Finals Week. Starting 2014, the format of the race was changed to a scavenger hunt.