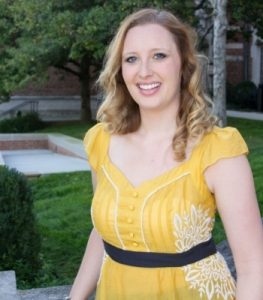 Lauren Brown, a fourth year chemistry Ph.D. student in the Long Research Group, was awarded the ACS Women Chemists Committee and Eli Lilly & Company Travel Award. As part of this award, Brown will present a poster titled “Enhancing Lactide Polymerization Control through the use of Redox-active Catalysts” at the Spring 2016 ACS National Meeting in San Diego, CA.

Brown grew up in upstate South Carolina. After earning her B.S. degree in Chemistry from Wofford College, she worked at Milliken & Company in Application Development for Performance Colorants and Additives. In 2012, Brown joined the Department of Chemistry at the University of Tennessee, Knoxville to pursue a Ph.D. degree. Later that year, she became part of the Long Research Group.

“Lauren has quickly become a leader within the Long Research Group.” Brian Long, Assistant Professor of Chemistry, said. “A portion of her hard work was recently published in the high-impact journal ACS Catalysis, and will be the topic that she will present at the upcoming ACS National Meeting in San Diego, CA.”

Awarded biannually, the Travel Award is intended to provide funding for undergraduate, graduate, and postdoctoral female chemists to travel to meetings to present the results of their research. Including Brown, a total of 11 researchers from all around the country received this award that will allow them to attend scientific meetings between Jan. 1st and June 30th, 2016. Awardees were selected on the basis of scientific merit and financial need.

“I am so proud of Lauren’s accomplishments to date,” said Long. “Lauren was selected to present her work at the Excellence in Graduate Polymer Science Symposium, which in itself is quite an honor. I expect that she will receive many more before she completes her doctoral work here at UT.”