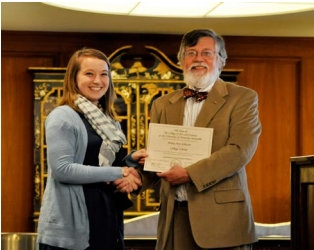 The NSF GRFP  will provide Johnson with funding for three years ($30,000 per year) along with a full tuition waiver. Johnson is now a graduate student at the University of Wisconsin-Madison in the Chemistry Department, Physical Chemistry Division. While looking forward to start her research project at the beginning of this summer, Johnson is currently focused on completing her first year of classes and teaching.

When Johnson entered UT, her concentration was Mathematical and Chemical Physics. As a freshman, Britta won the C. W. Keenan Prize given to the best student in Honors General Chemistry and in 2011 she was one of three UTK students to be awarded the prestigious Goldwater Scholarship. Johnson began her research in computational quantum chemistry with Professor R. J. Hinde in the Department of Chemistry as a freshman, an experience she described as most rewarding. “I wanted to thank Dr. Hinde for all of the support and opportunities that he provided me that made this (NSF GRFP) possible. I could not have gotten this without him!” Johnson said.

Her work with Professor Hinde has resulted in one peer-reviewed publication to date: B. Johnson and R. J. Hinde, “Pairwise Additive Model for the He-MgO(100) Interaction,” Journal of Physical Chemistry A, 2011, 115, 7112-7119. During the summers Britta worked as a resident advisor for the Governor’s School for the Sciences and Engineering while carrying on research in chemistry or mathematics.

Founded in 1952, NSF GRFP is a program that recognizes and supports outstanding graduate students in NSF-supported science, technology, engineering, and mathematics disciplines who are pursuing research-based master’s and doctoral degrees at accredited US institutions.This year, they awarded 2000 graduate students out of the 13000 who applied.

For more information about their program, check out NSF GRFP website.