Chuck Feigerle, head of the Department of Chemistry at the University of Tennessee, Knoxville, spent a summer learning how to make diamond films with Jim Butler from the Naval Research Laboratory in Washington, D.C. Feigerle and his associates grew the first diamond films for Buehler Hall’s Spallation Neutron Source (SNS). Then, with Department of Energy funds, a microwave plasma reactor was purchased for Bob Shaw’s lab at ORNL, where diamond foils were grown and tested for the SNS over the next few years. Shaw and Feigerle led the research group. He credits Leslie Wilson with carrying out much of the research.

Each foil is grown by chemical vapor deposition on a silicon wafer formed to have a desired corrugated surface pattern that makes the film rigid. The silicon substrate is dissolved away using acid, leaving just enough to serve as a handle for mounting the foil. 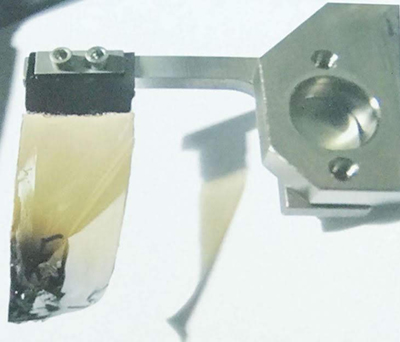 Feigerle spoke about ORNL and UT research in developing and testing this key component of the SNS in a recent talk.

The SNS employs nanocrystalline diamond foils made at ORNL to strip the electrons from negatively charged hydrogen atoms in a beam accelerated to almost 90 percent the speed of light.

Feigerle presented results on the development and use of nanocrystalline diamond stripper foils at the SNS. He described studies at ORNL of the transformations that occur in crystalline structure, emissivity and the carbon state of the foils from deposition of beam energy into the foil.

One finding is that after long exposure to high beam currents that increase the temperature to above 1,500 degrees Celsius, the diamond foils become more like a graphite, gray, crystalline, form of carbon used as a solid lubricant, in pencils and as a moderator in nuclear reactors (e.g., the Graphite Reactor, the world’s first continuously operated reactor that originally made ORNL famous).