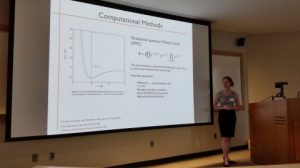 Barnes’ talk was focused on developing a model for hexagonal close packed (hcp) solid helium, a quantum solid, which includes a description of three-body interactions. She admitted that being the first presenter on the first day was “nerve wracking but fun.” Barnes said, “I received a lot of great questions and interest in my project, which is always encouraging.”

Dutra’s talk, titled“A density functional approach to understanding superfluid He-4 systems”, described using both a “mixing” and an imaginary time propagation method within density functional theory to evaluate the properties of free surfaces of He-4 as well as He-4 against attractive surfaces. “I thought the presentations went really well, and I got a few questions afterward too, which is always rewarding.” Dutra commented, “A lot of the other presentations were geared towards natural synthesis and biochemistry applications, but they were all good talks as well.” 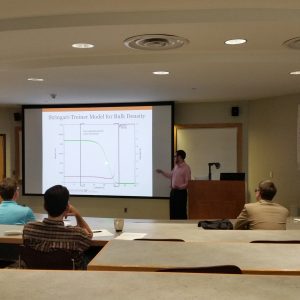 Over 20 graduate students from 8 different universities presented at this year’s symposium. “The goal is to give students a chance to practice their talks and share their research at a small meeting,” said Dr. Emily Rowland, instructor at MSU chemistry department said. Emily Rowland’s husband Professor Gerald Rowland started the symposium because “he wanted the students here to have an opportunity to invite ‘big named’ speakers and have a relaxed environment to present their research. ” Emily Rowland added.

The invited speaker this year is Naomi Halas, Professor of Biomedical Engineering, Chemistry, Physics & Astronomy and Director of Laboratory for Nanophotonics at Rice University, Texas.

“…we had the pleasure of listening to the keynote speaker, Dr. Naomi Halas from Rice University who shared with us her work in plasmonics, focusing on solar steam generation.” Barnes said, “the wide range of applications for this technology was very interesting, including cancer treatment in animals (and someday humans), solar-driven waste treatment, and many other applications.”