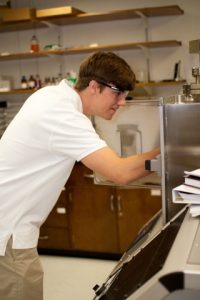 Hobbie Turley, a chemistry graduate student in Professor Camden’ group received 2014 Eastman Chemical Company Fellowship Award. Established in 2001, the fellowship was designed to assist students in their research as well as help Eastman identify top performers who are in the early stages of their graduate careers.

Each year, selected universities are requested to submit nominations of students and encourage them to apply. A team of scientists from Eastman then rank all of the received applications and award either travel grant or full fellowship to several applicants.

“Hobbie was selected as a fellowship winner because the team was impressed with his track record in his graduate studies at UT.” Dr. Peter Chapman, Eastman Principal Chemist commented, “The team also understood the high degree of difficulty presented by his current research project. Members of the team felt that Hobbie has a promising career as a scientist ahead of him.”

“I was both thrilled and honored to find out they had selected me.” Turley said, “I deeply appreciate their support, but I can’t forget that I couldn’t have done it without the help of my advisor Jon Camden and my fellow lab mates.”

Originally from Memphis, Tennessee, Turley attended the University of North Carolina at Chapel Hill. After he graduated in 2011 with a B.S. in chemistry, Turley returned to Tennessee to pursue a Ph.D. in Analytical Chemistry at UTK under Professor Jon Camden. His current research is focused on developing a nonlinear surface-enhanced spectroscopy (Surface-Enhanced hyper-Raman or SEHRS) for ultrasensitive detection. Since Turley joined the Department, his reserch has rendered two publications. The first was a second author for his contributions to the first observation of single-molecule SEHRS. The second was a first author for his work on exploring these of SEHRS with short-wave IR (SWIR) excitations. Turley also recently presented the SWIR work in a talk at the ACS meeting in Dallas.