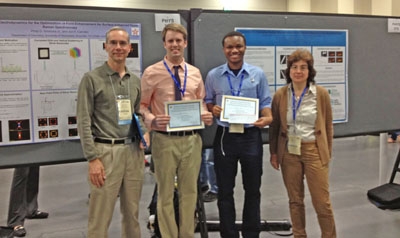 During the poster session, Simmons and Iberi presented some results of their project aiming to correlate plasmon data obtained from optical microscopy and electron microscopy with theory. “Vighter did the experimental and I did the theory work.” Simmons said.

Iberi and Simmons both described their working experience with each other as fun and rewarding. “Working with DJ (Simmons) has been fun!” Iberi said. “He (Simmons)’s been very helpful in doing all of the complex classical electrodynamics calculations related to our experiments.” Simmons added that while both theory and experiment parts are challenging and call for a tremendous amount of work, “working together we’ve been able to accomplish much more than we would have just working solo.”

They are looking forward to continuing this project. “Work still has to be done in understanding the behavior of electromagnetic hot spots that are responsible for surface-enhanced Raman scattering (SERS) when excited by an electron beam.” Iberi said.

Iberi obtained his B.S. degree from Campbellsville University in 2008 and joined Camden Group in 2009. Now a 3rd year graduate student, Iberi’s research area focuses on the plasmonic studies of nobel metallic nanostructures by using the powerful tools of electron and dark-field optical microscopy. After graduation, Iberi hopes to pursue a career in a research institution such as a National Laboratory or a company with an intellectually stimulating Research and Development division.

Hailed from Buckhannon, West Virginia, Simmons joined the Camden Group in 2011 after obtaining his B.S. from Fairmont State University in 2009. His research involves computational electrodynamics of plasmonic nano-structures and Raman spectroscopy. Although it might still be early to think about career after graduation, Simmons hopes to join the computer hardware industry eventually.