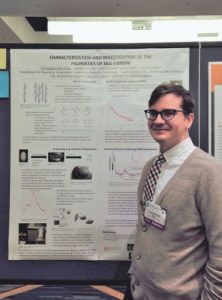 Three members of Professor John Larese’s Group, Christopher Crain, Daniele Paradiso and Nick Strange presented their work at the Spring Meeting of the Materials Research Society (MRS) in San Francisco on April 8. They highlighted the combination of neutron scattering, thermodynamic and computational modeling expertise of the group. Starting with just four symposia in 1983, the MRS Spring Meeting and Exhibit has grown to over 50 symposia and over 5,000 attendees. Held annually in San Francisco’s Moscone West convention hall, MRS Spring Meetings are essential events for discovering and presenting the very latest developments in materials research. 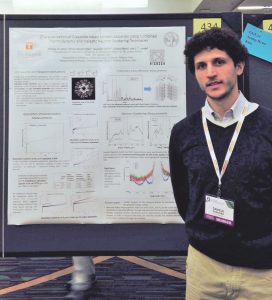 Crain’s, Paradiso’s and Strange’s presentations were part of the Symposium: Foundations of Bio/Nano Interfaces─Synthesis, Modeling, Design Principles and Applications which included a several sessions of talks and posters by world experts in bioinspired materials. Crain who enters UT graduate program officially this fall noted, “I was especially excited by my opportunity to listen to and meet Tufts University Professor David Kaplan and Chris Holland originally from Oxford University, two natural silk experts.” Naturally Chris’ contribution Inelastic Neutron Scattering Studies of Natural Silkworm Proteins was a perfect match for the symposium. The numerous attendees that questioned him about his neutron results used to record vibrational spectra and follow protein hydration in-situ validated this. The spectra were recorded using the SNS’s VISION spectrometer, the neutron analogue of a Raman spectrometer that was conceived and designed by Larese and an international team he led.

Paradiso’s paper Characterization of Dipeptide-based Sorbent Materials Using Combined Thermodynamic and Inelastic Neutron Scattering Techniques followed the bio-inspired symposium theme and gave Paradiso, a native of Milan, his first taste of a large scale international meeting in the city by the Bay shortly before finishing his first full year in the US and the University of Tennessee Knoxville. Paradiso had several people express interest in his results and neutron scattering findings related to the rotational dynamics within the channels of the dipeptide materials. 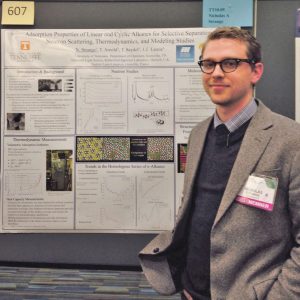 Strange’s presentation Adsorption Properties of Linear and Cyclic Alkanes for Selective Separations: Neutron Scattering, Thermodynamics, and Modeling Studies in the Symposium: Metal Oxides-From Advanced Fabrication and Interfaces to Energy and Sensing Applications described his ongoing efforts to understand the interaction of longer chain alkanes with solid surfaces using thermodynamics, scattering and modeling methods. Strange noted his new found appreciation for the large number of international visitors from Europe, the Middle East, Asia, Latin America and Australia interested in the groups neutron scattering in the type of research he was involve in. Larese noted, “The guys got a first hand taste of how their research results fit on the world stage and I think they came away with a confidence level that was energizing. I am happy they are getting their Ready for the World experience!”