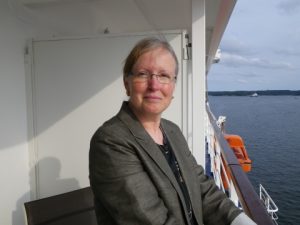 Lee Magid, Professor Emeritus of Chemistry at the University of Tennessee, Knoxville, was selected as one of 2014 Neutron Scattering Society of America Fellows, for her “outstanding leadership in cold neutron research on complex fluids and critical service to the neutron field.”

Magid received her PhD degree in chemistry from the University of Tennessee, Knoxville in 1973, and joined the faculty that same year. She retired in 2006.

In her research she studied the structure and dynamics of organized assemblies such as micelles and polyelectrolytes via (among other techniques) small-angle neutron scattering, neutron spin-echo spectroscopy and neutron reflectivity. She served as Associate Dean for Research in the College of Arts and Sciences from 1987 to 1990, and as Executive Assistant to the Chancellor, 1990-91; she was Vice-President for Research and Graduate Studies at the University of Kentucky from 1991 to 1994. She also served as Executive Officer and Science Advisor in the National Science Foundation’s Chemistry Division from 2004 to 2006.

Magid has held several short-term research appointments at Oak Ridge National Laboratory, the Swiss Federal Institute of Technology in Zuerich, and the Max Planck Institute in Goettingen, Germany. She is a Fellow of the American Association for the Advancement of Science and chaired the Solid State Sciences Committee of the National Academies/National Research Council. She also led or participated in numerous studies and planning activities for the Spallation Neutron Source and for a planned European spallation source.