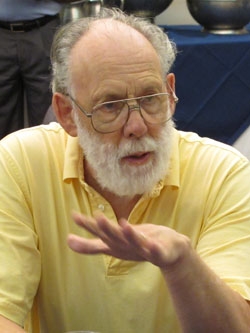 I am sad to report that Dr. Fred Grimm, Professor Emeritus of the Department of Chemistry at the University of Tennessee, passed away on Saturday, February 9, 2013.  Fred was born on June 15th, 1937 and is survived by his wife, Pam and daughter, Gail.

Fred had a strong reputation in the area of chemical physics, where his research emphasis was in theoretical methods of studying photoelectron dynamics and surface phenomena.  He published over 70 papers in scholarly journals, was a long-time collaborator with Tom Carlson and Manfred Krause at ORNL, and was an invited Research Scientist at the Swedish National Research Council.  Professor Grimm was a dedicated and skilled teacher who taught general chemistry and all levels of physical chemistry.  He served as the Director of General Chemistry for the department for more than a decade.  Fred was always a gentleman and treated colleagues, staff and students with gentleness and respect.  He will be missed.  A memorial service for Fred Grimm will be held on Saturday, March 2nd at 10 AM in the Mann Heritage Chapel at Rose Mortuary, 6200 Kingston Pike.