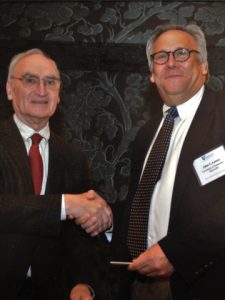 Professor J. Z. Larese has been named by the American Association for the Advancement of Science (AAAS) to its 2014 class of fellows. The AAAS has named Larese a fellow for, “Outstanding neutron-scattering and thermodynamic studies of the structure and dynamics of molecular adsorption on surfaces and development of related instrumentation.” Larese (right) travelled to San Jose, CA in February to accept this prestigious award from AAAS President, Gerald Fink (left).

Larese led the project to design and build the vibrational spectrometer, VISION the world’s first high-resolution inelastic neutron scattering instrument with simultaneous diffraction capabilities at the Spallation Neutron Source at ORNL. He has spent much of his career devoted to the understanding of adsorption processes in two-dimensions used widely in energy conversion studies, catalysis, optoelectronics, and more. During his time at Brookhaven National Laboratory as a tenured Senior Scientist he headed a neutron/x-ray scattering-materials chemistry group. There he developed an automated, high-resolution adsorption isotherm apparatus frequently used for studying the thermodynamics of adsorbed systems. Larese has been instrumental in the development of cryostat inserts for low temperature and pressure neutron experiments which are now used internationally at Rutherford Appleton Laboratory (Harwell, U.K.) and Institut Laue-Langevin (Grenoble, France). He also is the co-owner of a patent (US Patent 6179897) with Walter Kunmann to synthesize high-purity, monodisperse metal oxide nanostructures.

Larese, now a professor in the UTK Department of Chemistry runs a materials chemistry research group with an emphasis on neutron and x-ray scattering. He is a research affiliate of both the Joint Institute of Neutron Science (JINS) and Joint Institute of Advanced Materials (JIAM). Larese’s group will be expanded into the new JIAM building on UTK’s Cherokee Farm campus in the coming years.

AAAS is the world’s largest and most prestigious general scientific society, with 126,995 individual and institutional members at the end of 2008. It is also the publisher of the well-known scientific journal Science, which was founded in 1880 on seed money from the American inventor Thomas Edison. It now has grown into the largest paid circulation of any peer-reviewed general-science journal with a weekly circulation of 138,549.