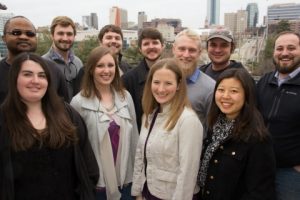 Assistant professor of chemistry Brian Long has received the Army Research Office (ARO) Young Investigator Award in March 2014. The ARO Young Investigator Program was designed to attract “outstanding young university faculty members, to support their research, and to encourage their teaching and research careers.” The award is highly competitive and considered prestigious among young faculty members.

Professor Long plans to utilize these funds “to further elucidate the role that redox activity plays in olefin polymerization catalysis, thereby enhancing fundamental understanding of olefin polymerization activity, selectivity, and stability. Furthermore, those catalysts will be used to synthesize polymers with tailored architectures and microstructures.”

Professor Long obtained his B.S. degree in chemistry from North Georgia College & State University (now the University of North Georgia) in 2003 and his PhD from the University of Texas at Austin in 2009. After graduating, he moved to Ithaca, NY to pursue his postdoctoral studies at Cornell University. Prof. Long joined the UTK faculty in 2011, and his group’s research has focused on the development of olefin polymerization catalysts, functional polyolefin-based materials, and catalytic biomass conversion. A portion of the Long group’s work in the field of olefin polymerization catalysis was recently published in the Journal of the American Chemical Society (J. Am. Chem. Soc., 2013, 135, pp 16316–16319).

Professor Long and the Long group would like to thank the ARO for their generous support of our research.