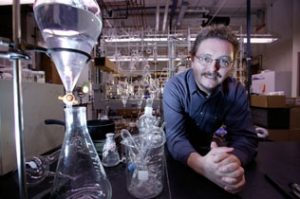 Professor Jimmy Mays is selected as one of the three 2011 recipients of the Herman F. Mark Scholar Awards of the Polymer Chemistry Division of ACS. The Awards will be given during 2011 ACS Annual Meeting in Denver, CO this August.

The Awards were established in 2006 and are sponsored by Elsevier, the publishers of the journal Polymer. It is founded to recognize excellence in basic or applied research and leadership in polymer science by scientists of all ages. The awards are usually presented biennially at the Fall meeting of the Polymer Chemistry Division.

“The late Herman Mark was one of the pioneers of polymer science, and it is a great honor to receive this prestigious award that bears his name.” While feeling hornored to be given this award, Professor Mays expressed his gratitude towards those whom he has collaborated and worked with, “In reality this award does not so much recognize my personal contributions to polymer science as it recognizes those of the numerous students, postdocs, and collaborators that I have had the pleasure of working with over the years. I also thank Professor Mark Dadmun for nominating me for this award”.

The award consists of a plaque and an honorarium of $1000, which may be used to support travel expenses to the ACS Meeting including the Herman F. Mark Symposium, where each Mark Scholar is expected to present a lecture.