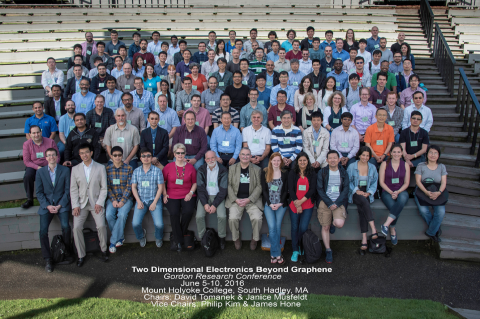 The conference was held to address “the fundamental properties and potential uses of ultrathin layered systems with a fundamental band gap including transition metal dichalcogenides, group V systems including phosphorene, and related isoelectronic structures.” More than 140 researchers in the fields of Physics, Chemistry, Materials Science and Device Engineering attended the conference.

“It is the best conference (by a large margin) I’ve attended this year — lots of exciting new results, discussion and networking. Hopefully we’ll have another one in 2 years!” said Jeanie Lau, professor of physics and astronomy at University of California Riverside.

“This was the kick-off meeting for a conference in a very new and exciting field, ” said Musfeldt. “With 140 participants across academics, national labs, and industry and from all over the world, I’d say that we more than met our initial goals.” Musfeldt was especially impressed by the poster sessions during this year’s conference and described them as “incredibly well attended and active.”

Besides this year’s conference, Musfeldt also chaired the first Gordon Research Conference of Multiferroics and Magnetoelectrics in 2014. “(What’s motivating me is) to bring the whole community together to stimulate activities this growing field.” Musfeldt said.