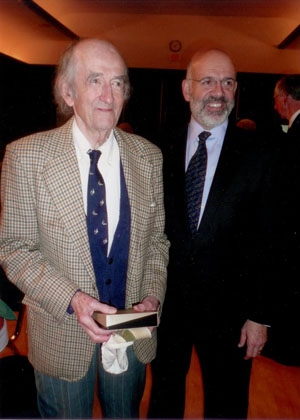 Not a lot of people can say that they have worked for half a century, let alone for one employer – the University of Tennessee. Professor Ffrancon Williams (in picture left) was proudly being recognized for his 50 years of service to the University during the Service Awards Luncheon with UT President Joe DiPietro (in picture right) and UT Knoxville Chancellor Jimmy Cheek on Wednesday, Dec. 14, 2011.

Williams joined the Department in 1961 as an Assistant Professor. His tenure at the University and continuous funding from the Department of Energy for almost 40 years have allowed Williams the chance to do what he loves most – research. He has also been active in teaching, however, and was the recipient of  the Student Associates of the American Chemical Society (SAACS) Outstanding Chemistry Professor Award in both 2009 and 2010.

Williams has been engaged in research on various aspects of radiation chemistry and intermediate species in chemical reactions for over 60 years. One of his most-proud-of research projects was conducted in the 1970s. He was the first one to demonstrate quantum-mechanical tunneling and “all-or-nothing” deuterium isotope effects in hydrogen-transfer reactions at low temperatures. Williams has generated more than 200 journal articles, among which many are cited for more than 100 times. (comprehensive list of publications)

During his 50 years at UT, Williams has directed 18 Ph.D. dissertations and 7 M.S. theses. He has received numerous awards and honors, including being a National Science Foundation Visiting Scientist, which allowed him to conduct research in Kyoto University, Japan; and a John Simon Guggenheim Memorial Foundation Fellow, a fellowship that nowadays seems “almost impossible to get” with 4,000 applications each year for some 200 awards. He has also chaird the Gordon Research Conferences on Radiation Chemistry (1971) and Radical Ions (1984).

UT Service Awards are given to those who have been part of the UT family for 25 years or more to honor their continued contributions and loyalty to the University of Tennessee. View a list of Fall 2011 honorees.