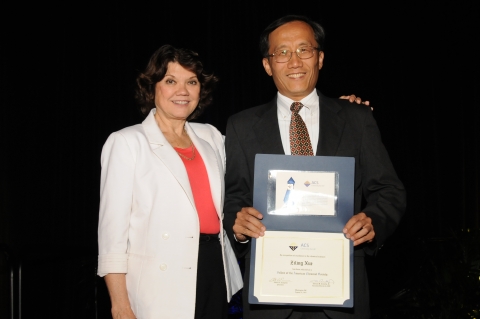 Ziling (Ben) Xue, Professor of Chemistry, has been named one of the 65 American Chemical Society Fellows in 2017, announced in the June 19 issue of Chemical & Engineering News (C&EN) and was honored at the fall ACS National Meeting in Washington, DC. ACS Fellows Program recognizes members for their “outstanding achievements in and contributions to science, the profession, and the Society.”

Xue was honored for his “significant contributions to synthetic and physical inorganic chemistry. He discovered the pathway to the archetypical carbene that led a Nobel Prize and is cited in textbooks in the field, ” stated on the ACS website.

Also mentioned was Xue’s contribution to the ACS community. “As the Division of Inorganic Chemistry Membership Chair for eight years, Xue led successful recruitment activities, resulting in 300%, 20%, and 31% increases in undergraduate, student, and total new memberships, respectively, in 2015.”

Xue came to UT in 1992 after receiving his bachelor’s degree from Nanjing University-Nanjing University College of Pharmacy, completing his doctorate from the University of California, Los Angeles, and doing postdoctoral research at Indiana University. He was previously named an National Science Foundation (NSF) Young Investigator. Xue is also a fellow of the American Association for the Advancement of Science. He has served as UT’s College of Arts and Sciences representative on university-wide committees. Xue has also been an associate editor of Science China Chemistry, a flagship publication of the Chinese Academy of Sciences.