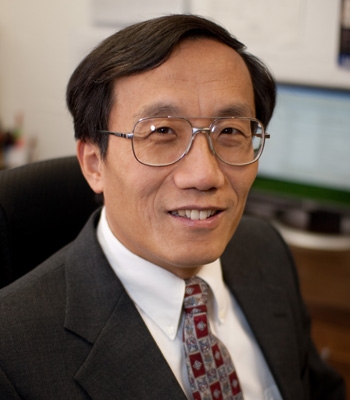 UT employees with at least 25 years of service were recognized at the university’s fall Service Awards Luncheon on Wednesday, Dec. 13. Chemistry professor Ben Xue was honored for their continued contributions and loyalty to the University of Tennessee.

The event, hosted by UT System President Joe DiPietro and coordinated by the Office of the President and UT Human Resources, honored employees from UT Knoxville, the UT Institute of Agriculture, the UT System administration, and the UT Foundation. The Service Awards Luncheon is held in the spring and fall to recognize employees with service milestones of 25 or more years.

Zi-Ling (Ben) Xue studied physical chemistry-catalysis at Nanjing University–Nanjing College of Pharmacy, and received his B.S. degree in 1982.  He was selected in 1983 as a Chemistry Graduate Program (CGP or William von E. Doering Program) fellow, and entered the Ph.D. program at the University of California at Los Angeles in 1984, studying organometallic chemistry with Herbert D. Kaesz.  After receiving his Ph.D. degree in 1989, he moved to Indiana University in 1990 as a postdoctoral fellow with Kenneth G. Caulton and Malcolm H. Chisholm. In 1992, he accepted a position as Assistant Professor at the University of Tennessee.  He is now a Paul and Wilma Ziegler Professor of Chemistry.  He served in 1999-2001 as a member of the Executive Committee, ACS Division of Inorganic Chemistry, and was the division Membership Chair in 2007-2015.  Professor Xue is a Fellow of the American Association for the Advancement of Science (AAAS) and American Chemical Society (ACS). Professor Xue has received several awards including a National Science Foundation (NSF) Young Investigator Award and a NSF Special Creativity Award, Camille Dreyfus Teacher-Scholar Award, DuPont Young Professor Award, Changjiang Lecture Professor, Distinguished Oversea Young Scholar Award (Chinese Natural Science Foundation), and UK Royal Society Kan Tong Po Visiting Professorship.  He was an Associate Editor, Science China Chemistry, in 2010-2017.