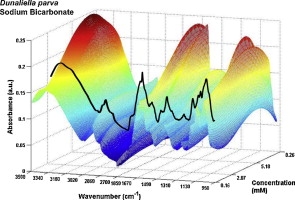 Dr. Rebecca Horton, a student graduated from Professor Vogt’s group in May 2012 had her article featured on the cover of October 2012 issue of Analytica Chimica Acta.

“Understanding the biochemical interactions microalgae have with their environment is key in studying the effects of environmental contaminants.” Horton commented on the significance of her study. “Since microalgae respond to their environments in a nonlinear fashion, a novel method for investigating these responses was necessary. While this work has been applied to the study of microalgae, these algorithms open new possibilities for studying a variety of nonlinear systems and responses, both biological and chemical.”

Horton came to UT from Carson-Newman College in Jefferson City, TN. Her achievements in research involve growing microalgae under different environmental conditions along with sample preparation methods for spectroscopic analyses and complex chemometric algorithms for studying biological processes. This work also resulted in a publication in Applied Spectroscopy in 2011. She recently received a travel award from Eastman Chemical Company for presenting her work at the ACS National Meeting and won the 2010 Chemistry Board of Visitors Poster Competition.