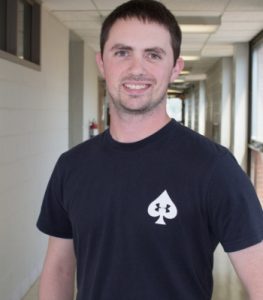 In his first-authored paper, Ogburn developed analytical methodologies that utilize microalgae’s adaptation as a novel approach for in-situ environmental monitoring. Microalgae are important component in marine ecosystems because of their ability to transform large quantities of inorganic compounds into biomass. The study specifically looked at phytoplankton’s sequestration of atmospheric CO2, a greenhouse gas, and nitrate, one cause of harmful algae blooms.

Frank Vogt, associate professor of chemistry and Ogburn’s mentor, is quite proud of Ogburn’s achievement. “I want to point out that ACA is a leading journal in analytical chemistry and Zack got this paper accepted at the end of his 2nd year!” Vogt said.

ACA is an international journal that publishes research in all branches of analytical chemistry. According to 2016 Journal Citation Reports published by Reuters, ACA has a 5-year impact factor of 4.841.

Ogburn grew up in Loganville, GA, where he graduated from Loganville High in 2009 as well as enlisted in the Georgia Army National Guard. He was a recipient of the Georgia Military Scholarship and graduated from the University of North Georgia with his B.S. in chemistry in 2013. Upon graduation Ogburn received a commission as an officer in the Chemical Corps and he is currently a 1st LT serving as the chemical officer for the 1-121 Infantry Battalion of the Georgia Guard. Ogburn joined the Department of Chemistry at the University of Tennessee, Knoxville in the spring of 2015 and is currently working towards his Ph.D. in analytical chemistry.