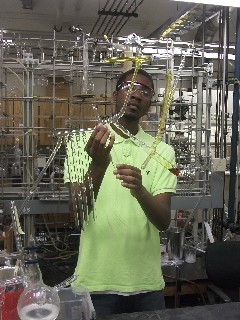 Humming hymns and talking himself, Brandon Hambrick lets his photographic memory take him step by step through a process known as polymerization.

In the science experiment, the 18-year-old from the Harrison area is creating a chain of large molecules by combining smaller ones — kind of like linking many small Legos to create a big one.

Unlike most students at the University of Tennessee, Knoxville, Hambrick is still on campus for the summer, one of eight students selected by the school for this year’s Summer Undergraduate Research Program in chemistry, which is funded by the National Science Foundation. Having just finished his freshman year at UT, he’s the youngest student selected for this year’s program, at least 3 years younger than almost every other participant.