Since nanostructures continue to be fabricated with ever reducing size and increasing complexity, Camden suggested that studies such as this could “ultimately provide a unified picture of optical and electron beam excited plasmons demonstrating that plasmon maps derived from EELS excitation have direct relevance for the plethora of processes relying on optical excitation of plasmons.” Camden also feels that the correlated measurements described in Vighter’s paper will”deepen our understanding of structures used for surface enhanced spectroscopies, sensor devices, sub-diffraction limit wave-guiding, and energy harvesting.” 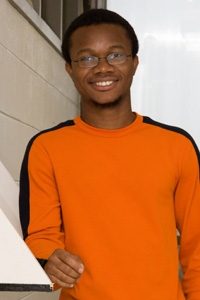 The Camden group, formed in 2008, is working to develop new applications of plasmonic nanostructures and to understand fundamental features of the molecule-plasmon couplings underlying these applications. This published study fits into the whole group’s project because “a thorough understanding of SERS enhancement factors largely depends on the plasmonic properties of these nanostructures currently being investigated.” said Vigther.

Vighter O. Iberi (JR) is originally from Nigeria and earned his Bachelor Degree of Science from the Campbellsville University in 2008 prior to joining Camden group in 2009. His current research area involves the study of surface plasmons in metallic nanostructures and their application to Single Molecule Surface Enhanced Raman Spectroscopy (SMSERS).

*Based on the 2010 Journal Citation Reports®