Metal-organic frameworks (MOFs) are a class of hybrid inorganic/organic materials with exceptional properties that have been used in many chemical applications such as catalysis, gas separations, and sensors.

For the first time, gas‐phase catalytic activity occurring at the metal nodes of a crystalline MOF was reported in a recent collaborative work among the groups of Professor Kostas Vogiatzis (theory), and Professors Donna Chen (catalysis, characterization) and Natalia Shustova (synthesis) from the University of South Carolina.

Vogiatzis said, “Also, this study shows for the first time a rhodium at oxidation state II can be introduced in a MOF. “ 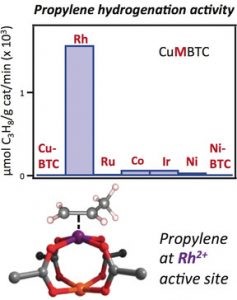 The electronic structure of the heterobimetallic Cu-Rh node and the reaction mechanism of the hydrogenation of propylene was elucidated by post-doctoral associate Rajesh Thayalan in Professor Vogiatzis research group.

The conclusions of this collaborative work were published in Angewandte Chemie International Edition in an article that was selected as “hot paper” by the editor.