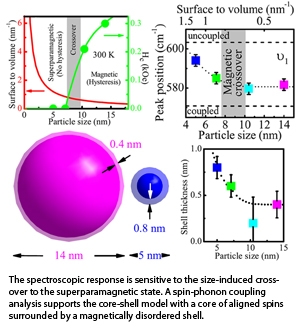 Qi (Charles) Sun, a graduate student in Professor Musfeldt’s Group, published an article in ACS NANO, a monthly journal that provides an international forum for the communication of comprehensive articles on nanoscience and nanotechnology research. *

In the article Spectroscopic Signature of the Superparamagnetic Transition and Surface Spin Disorder in CoFe2O4 Nanoparticles, the researchers measured the infrared vibrational properties of CoFe2O4 nanoparticles and compared the results to trends in the coercivity over the same size range and to the response of the bulk material.

“To the best of our knowledge,” Sun said, “this work is the first time to report a spectroscopic signature of the superparamagnetic transition and surface spin disorder from the spectroscopy point of view.”

Sun is originally from Huadian City, Jilin Province, China. He received his B.S. degree of Polymer Chemical Engineering in June 1999 from Dalian University of Technology in Dalian, China. Then he joined Changchun Institute of Applied Chemistry Chinese Academy of Science in Changhcun, where he received M.S. degree majoring in Chemistry and Physics of Polymers in June 2005. In August 2007, Sun came to UT and joined Musfeldt Group to begin research in the field of spectroscopic investigations of nanoscale materials.

Prior to this publication, Sun has more than 10 publications and 5 patents.

* Published monthly, ACS Nano is an international forum for the communication of comprehensive articles on nanoscience and nanotechnology research at the interfaces of chemistry, biology, materials science, physics, and engineering. Moreover, the journal helps facilitate communication among scientists from these research communities in developing new research opportunities, advancing the field through new discoveries, and reaching out to scientists at all levels.