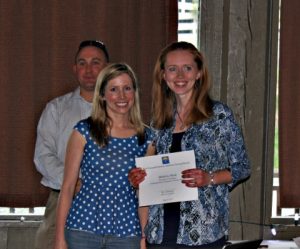 Several students, alumni and faculty members in the Department of Chemistry at the University of Tennessee, Knoxville were recognized at the 2016 East Tennessee Section of the American Chemical Society (ETS-ACS) Awards Banquet on May 5 hosted at Calhoun’s on the River Restaurant. George Kabalka, Professor of Chemistry, was invited to give a talk titled, “Boron: Basic Science to Modern Medicine (A Personal Journey).”

During this year’s Awards Banquet, Xinyi Lu, Chemistry graduate student, received the Graduate Fellowship Award, Madeline Stark, Chemistry undergraduate student, received the Undergraduate Senior Award, and Department of Chemistry alumni, Rachel Glazener, was recognized as ETS-ACS Past-Chair and Elissa LaPointe was named the ETS-ACS High School Teacher of the Year. Several Emeritus Professors of the Department were also recognized for being members of ACS for 50 and 60 years. Click to view a complete list of awardees.