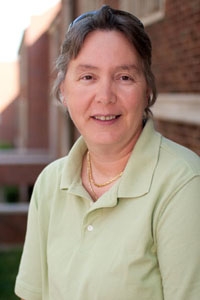 Christiane Barnes, Lecturer of Chemistry, is appointed as the Director of General Chemistry effective January 1, 2012. Dr. Jeff Kovac stepped down as Director after 12 and one-half years of service.

Having taught general chemistry for almost 20 years, Barnes is no stranger to the program. However, the new tasks still present some challenges for her. “I want to put my feelers out to faculty and see how they want to make the general chemistry program better than what it is now.” Barnes said.

Born in Germany, Barnes came to the University of Tennessee in 1986 and obtained her Master’s Degree in Chemistry in 1988. She went back to Germany and received her Ph.D. degree in 1991 from the University of Bonn. Barnes was then hired back as a post-doc working in Dr. Baker‘s lab in 1992, and served as an Editorial Assistant for the journal, Carbohydrate Research during 2000-2011. She started her teaching career in the Department in 1993.

“In the past few year, she (Christiane Barnes) reinvigorated the Educational Advancement Program section of general chemistry, making it a popular and successful option for at risk students.” Dr. Charles Feigerle, Head of the Chemistry Department, is confident that Barnes will “bring the same energy and enthusiasm for chemical education to the position of Director of General Chemistry.”