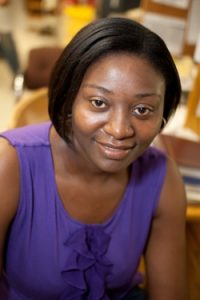 The award will support Abia to attend the YCC Leadership Development Workshop. This YCC program recognizes emerging leaders in the profession and helps them prepare for the leadership opportunities at volunteer organizations, such as ACS, and in their professional careers.

Abia will attend the workshop from Friday, January 21, 2011, to Sunday, January 23, 2011. The workshop is held in conjunction with the ACS Leadership Institute, in Fort Worth, Texas. During the workshop, participants will engage in discussions about the characteristics and behaviors of effective leaders, identify leadership skills, develop a personal leadership development plan, and learn about leadership opportunities in the American Chemical Society.

Irene Esah Abia (Angeh) was born in Buea, Cameroon. After graduating from Bilingual Grammar School Buea in 1997, she attended the University of Buea where she graduated with a Bachelor’s degree in Chemistry. In 2003, she enrolled into the Medical University of Southern Africa, South Africa where she obtained an Honors Bachelor degree in Chemistry. From 2003 to 2006, she went on to study at the University of Pretoria, South Africa where she conducted research with Professor Kobus Eloff earning a Master’s degree in Medicinal Chemistry. In the fall of 2006, she moved to the United States and joined the research group of Professor David C. Baker at the University of Tennessee-Knoxville, where she is conducting research in the synthesis of carbohydrates. Prior to this award, Abia also received CIBA Young Scientist Award.