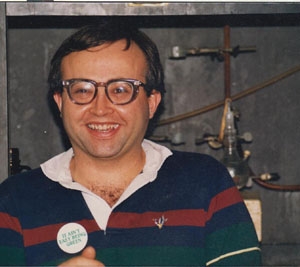 (better known as Jim) was born on July 7, 1954 in Pueblo, CO.  He was born to Forrest and Sue Green.  He is survived by his sister Jane.  Jim attended the Massachusetts Institute of Technology where he received a B.S. in Life Sciences and a B.S. in Chemistry.  He later received a Masters in Biochemistry.  In 1985 he moved to Knoxville, TN where he began his Graduate Career at the University of Tennessee-Knoxville under the direction of George W. Kabalka.  After the completion of his Ph.D., Jim stayed with UT where he became an Instructor.  While Jim was creative researcher, it was no secret that teaching was his calling.  He is most well known throughout the university for his service as an instructor.  Jim stayed with U.T. until the summer of 2010, at which time he became a Professor of Chemistry at Lincoln Memorial University, in Harrogate Tennessee.  Though his days there were short, he made no less of an impact on the student population at LMU than he had here at UT.  After a short battle with pancreatic cancer, Jim passed away on December 23, 2011.  A memorial fund has been created in his honor at Lincoln Memorial University.  If you have questions about donation procedures please contact Kelly Hall.