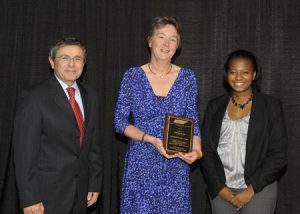 Professor Christiane Barnes, lecturer and Director of General Chemistry in the Chemistry Department, was awarded Faculty of the Year during the 3rd annual Tennessee Louis Stokes Alliance for Minority Participation (TLSAMP) Awards Banquet hosted in the University Center Ballroom on Monday, April 15 at 6pm.

More than 50 faculty, staff and TLSAMP scholars participated in the Awards Banquet. Barnes was nominated by Chandler Wallace, a senior in biomedical engineering, describing her as a professor who is making learning fun and interactive. “She is very passionate about Chemistry and it shows through lectures and effort brought to the classroom.” Wallace wrote in his nomination.

Born in Germany, Barnes came to the University of Tennessee in 1986 and obtained her Master’s Degree in Chemistry in 1988. She went back to Germany and received her Ph.D. degree in 1991 from the University of Bonn. Barnes was then hired back as a post-doc working in Dr. Baker‘s lab in 1992, and served as an Editorial Assistant for the journal, Carbohydrate Research during 2000-2011. She started her teaching career in the Department in 1993.