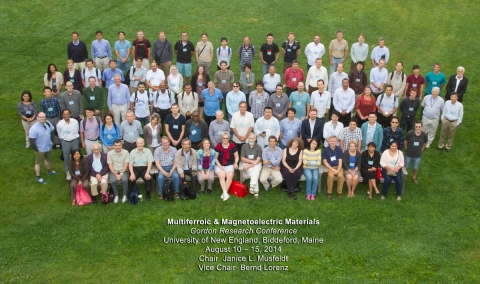 Professor Musfeldt ( first row, eighth from left) with co-chair Bernd Lorenz from Houston and the other attendees.

Janice Musfeldt, professor of chemistry, chaired the first Gordon Research Conference in multiferroics and magnetoelectrics held from August 10 to 15  in University of New England in Biddeford, Maine.

The conference featured a wide range of scientifically and technologically important topics such as the origins of various microscopic coupling mechanisms, the behavior of domain structures, the role of spin-orbit coupling, and the consequences of nanoscale confinement. Due to the highly interdisciplinary nature of the conference, invited speakers represented various scientific disciplines including chemistry, physics, materials science, and engineering. One of the attendees commented that this conference was simply “top end.”

“The scientific level and the open nature of the exchange at the talks and beyond was remarkable,” Dr. Ashot Melikyan, an editor of Physical Review B, commented. “I will certainly be applying to 2016 Gordon Conference on multiferroics. The editors of APS usually attend 2 – 4 conferences every year, and this one was one of the most informative and useful conferences i attended.”

This conference attracted more than one hundred attendees from 18 different countries. Besides scientific diversity, many attendees were also pleasantly surprised by the gender and geographic diversity. “I was very impressed with the diversity of the speakers and the participants at this meeting,” one of the attendees wrote in her feedback form. “It was wonderful to meet so many other women in the field, and also I was impressed by the number of countries represented.”

“I love bringing people together to discuss new science,” Musfeldt said. “In fact, I am already at work on the 2015 Tellunide workshop on spin-orbit coupling in 4- and 5d-containng materials!”