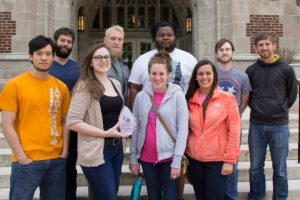 A group of chemistry graduate students won Top Fundraising Team Award given by the American Cancer Society during the 2014 Tennessee Relay for Life event held on April 11th in Circle Park on the University of Tennessee Knoxville campus.

“I want to stress that we had a lot more people than that come out to walk with us, and we had over 100 individual monetary donations to our team.” Rosolina, a third year graduate student in Xue’s Group and the Community Service Chair of Association of Chemistry Graduate Students said.

The chemistry team raised over $6,000 for the American Cancer Society which put them into third place out of forty teams for amount of money raised for the event. Out of a total of 1221 participants, Amanda Clune, a first year graduate student in Musfeldt’s Group, received the honor of top individual participant for most money raised. Overall, the entire event raised over $65,000 for the American Cancer Society.